In The Netherlands we’re collecting old mattresses via the 350 municipalities in a separate mono  stream since 2015. The existing destination of the majority of these mattresses end in the incinerator for energy recovery.

Normally these high-caloric materials were mixed with household waste with a lower caloric value. Incineration plant do not favorably accept these high caloric waste, since it damages the installation. On the other hand a couple of fires took place on municipalities due to wet mattresses.

The national agenda on the circular economy did encourage the sector to enlarge the recycling of mattress waste.  The instrument they have is the Extended Producer Responsibility (EPR). The mattress sector has spoken about recycling for many years. CBM did a regional pilot on recycling of mattress already in 1999-2000, and old reports are even known from sector plans dated 1997. Why did it took another 20 years?

In 2018 the Secretary of State (department of Infrastructure & Water management)  enforced the sector by an ultimation to come up with voluntary sector ideas and to take responsibility within a year, else we could expect an EPR scheme obligated by the Dutch government.

Recycling capacity in The Netherlands was limited, although the state-of-art in the Dutch mattress recycling was already more innovative comparing to other countries. The dependency on trimfoam recyclates (bonded foam) is also competing to virgin post-production feed and this struggling for a sound business case.

Due to the above, in combination with a knowledge that we want to recycle much more end-of-life mattresses in the upcoming years was the key driver to search for other recovery techniques. CBM took the responsibility on a early stages feasibility on thermochemical recycling. A Pyrolysis experiment combined with an LCA was done in 2018. The results where promising so we decide to cluster a consortium of mattress producers, recyclers, knowledge institutes (TNO), chemical industry and pyrolysis providers.  This chain-project had the goal to valorize the possible roadmap on the recovery of latex, polyurethane and ticking materials by using pyrolysis. In the project we compare a continuous screw pyrolysis reactor with a fed-batch process using radiolysis.

The project’s first phase was scoping the fingerprinting of these typical materials by Py-GCMS labor research in Petten (TNO-ET). Due to these tests we could discuss on potential chemicals expected in the mass balance, taking into account the process parameter time and temperature.

Both techniques are promising to produce oil and syngas for latex, while the fed-batch process of Enerpy was robust for all three materials (Latex, PU, ticking) tested on a pilot scale (150 kg/h).

In the presentation CBM will give some insides of the potential recovery products and conclusions on the feasibility for a chemical plant in The Netherlands. 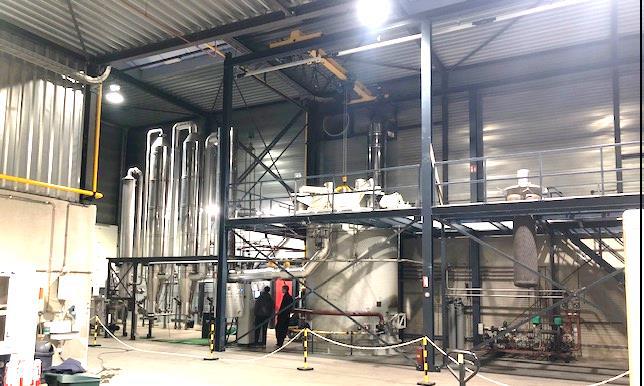